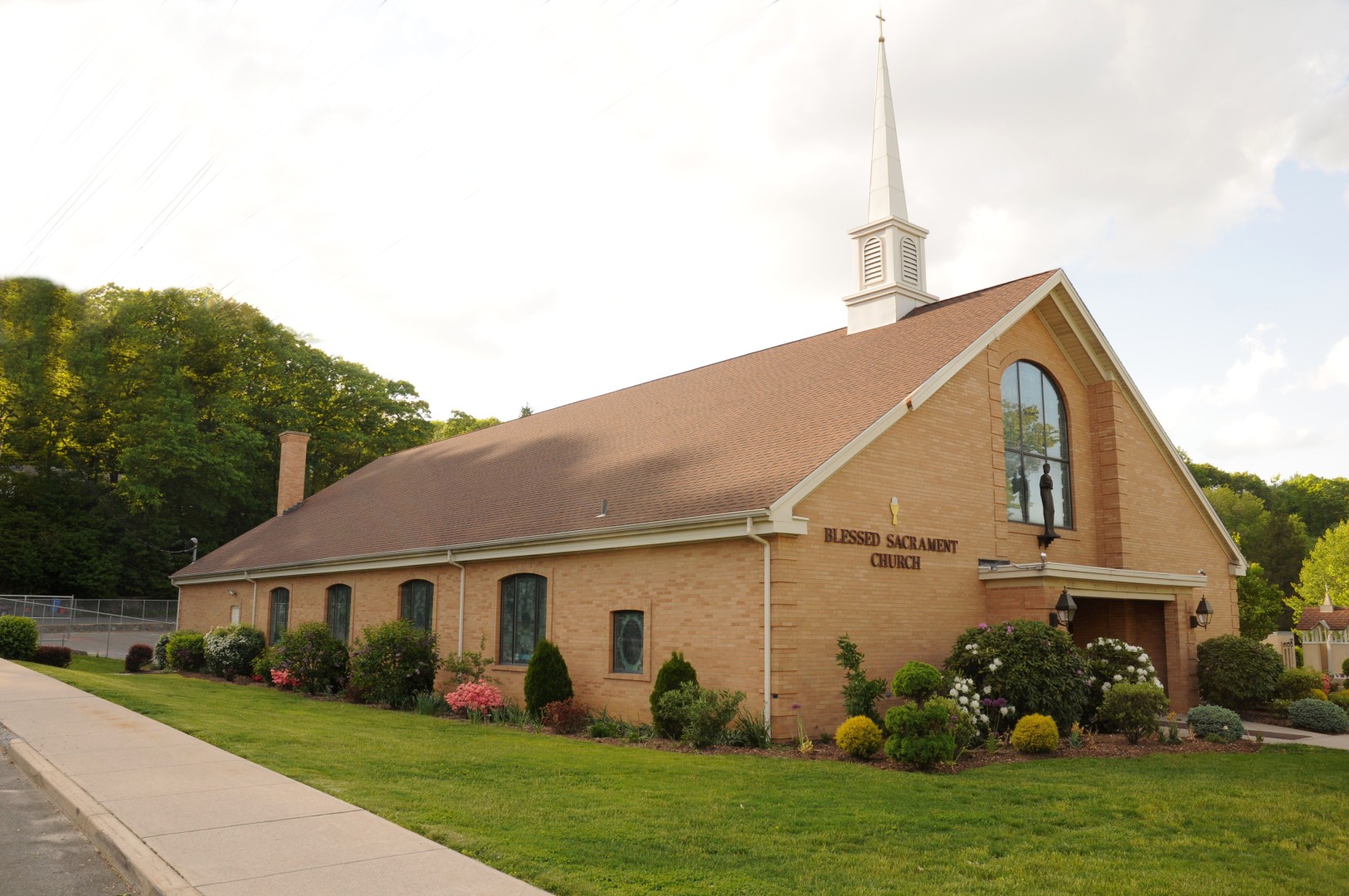 Bishop John J. Nilan established Blessed Sacrament parish in the western part of Waterbury on May 7, 1911, appointing Father Terence B. Smith as first pastor. Initially, Mass was offered at nearby St. Patrick Hall on East Main Street. Shortly thereafter, the cornerstone of a new church was blessed by Bishop Nilan in September. The ceremony was truly a Waterbury event as 10,000 people gathered for a gala parade. The new Robbins Street church, on a site selected by Bishop Nilan himself, was dedicated on November 30, 1911. A spate of parish societies was soon in place to fuel parish spirit. The pastor even adjusted the Mass times to coincide with the trolley car schedules. A rectory on Robbins Street was completed in 1916.

In 1917, Father Edward A. Flannery, orator and editor of the state’s Catholic newspaper, became second pastor. He was succeeded in 1926 by Father Charles W. Brennan, a priest well-loved throughout Waterbury for his daily walks through all city neighborhoods. He modernized and redecorated parish buildings. In early 1935, Father (later Monsignor) Edward L. Morrison was appointed pastor. He oversaw the heady parish growth of the World War II era, organized a strong catechetical program, and purchased houses on Robbins Street and Bunker Hill Avenue for a convent and site for catechism classes.

Appointed fourth pastor in 1948, Father John F. Kenney remained at Blessed Sacrament until 1971. This greatly esteemed priest built a parish school on Robinwood Road. Dedicated on April 24, 1956, the parochial institution was staffed by the Sisters of the Third Order Regular of St. Francis. In 1961 the parish marked its golden jubilee. During Father Kenney’s tenure, Blessed Sacrament was one of the first parishes in the Archdiocese to form a parish council. In his nearly quarter-century of service, Father Kenney embodied the love of Christ to his people, especially through his far-reaching concern for the parish Catholic Youth Organization.

Father Walter A. Vichas succeeded the retiring Father Kenney in 1971. A Waterbury native, Father Vichas soon experienced the profound loyalty of Blessed Sacrament’s people. The congregation pledged over $250,000 to renovate their church. So greatly was the financial goal exceeded that a new church was built instead. The edifice, of modified colonial design, was dedicated on January 11, 1981 by Archbishop John F. Whealon. The memorable year also marked the school’s silver jubilee.

Today the worshiping community of Blessed Sacrament  includes nearly 1,400 households. Self-described as a “faith-filled” people, the parish steadfastly maintains its school but also offers a variety of wholesome activities for all its young people. The Legion of Mary and the Ladies’ Guild retain their traditional strengths. Hundreds of baptisms have occurred since infant Vincent E. Rogers was christened on May 13, 1911. Blessed Sacrament constantly deepens its sacramental life by extending the power of God’s graces into many Gospel-motivated ministries. These ongoing apostolates, for example, furnish assistance to the needy and provide extensive spiritual and social programs to area convalescent homes.